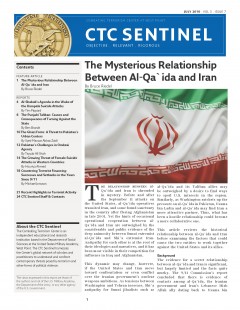 the somali islamist group al-Shabab demonstrated its expanding operational reach when it executed simultaneous suicide bombings in the Ugandan capital, Kampala, on July 11, 2010.[1] The attacks—targeting a rugby club and an Ethiopian restaurant in a neighborhood popular with expatriates as people watched the World Cup final—left 76 civilians dead, including one U.S. citizen.[2] While an investigation by Ugandan authorities into the attacks is ongoing (with some support from the U.S. Federal Bureau of Investigation), U.S. Department of State officials acknowledge that initial evidence confirms the al-Shabab connection to the blasts.[3]

Al-Shabab previously announced its internationalist ambitions on February 1, 2010 when it formally aligned with al-Qa`ida, stressing in a media release that the “jihad of the Horn of Africa must be combined with the international jihad led by the al-Qa`ida network.”[4] Yet for the most part, this move had minimal immediate impact on al-Shabab’s operational activities. Aside from a handful of minor incursions into northern and northeastern Kenya, the group has retained a focus on Somalia and foreign military and political targets in the capital city Mogadishu, as well as parts of central and southern Somalia.[5]

Therefore, the Kampala attacks—al-Shabab’s first successful major foreign operation—constitute an important development, raising questions about the extent to which al-Shabab is evolving from an Islamic-nationalist group claiming to operate on behalf of Somalis, to one now seemingly incorporated more fully into a broader pan-Islamic campaign. This article will examine the group’s capacity to pursue and sustain a campaign outside of Somalia’s borders.

Al-Shabab emerged as an independent entity in early 2007 following the collapse of the Islamic Courts Union (ICU), which controlled much of central and southern Somalia during the latter half of 2006 until an Ethiopian invasion in late December ousted the Islamists from power.[6] Its central aims since that time have been to overthrow Somalia’s Transitional Federal Government (TFG), implement Shari`a, and eject all foreign security forces from the country.

The heavy presence of foreign military personnel in Somalia is one of the key drivers of al-Shabab’s campaign, ensuring that the group has always incorporated a foreign-focused element. The African Union Mission in Somalia (AMISOM) is currently the only force capable of challenging al-Shabab’s ascendency in Mogadishu, having replaced Ethiopian troops in early 2007 to bolster the TFG.[7] Critically, of the 6,000 AMISOM military personnel currently deployed in Somalia, all but four military staff officers have been provided by Uganda and Burundi—a level of involvement guaranteeing that both countries remain priority targets for Somali Islamists.[8] Al-Shabab has also characterized AMISOM as a mere continuation of the Ethiopian invasion, and thus Ethiopia too remains a key al-Shabab adversary.

In this respect, the Kampala attacks mark the continuation and intensification of al-Shabab’s rhetorical and operational campaign directed at Ugandan and Burundian targets that has become increasingly pronounced and coherent in recent months. On July 9, 2010, just two days prior to the Kampala blasts, al-Shabab issued a statement encouraging Islamist militants in Chechnya, Pakistan, Afghanistan and elsewhere to attack the diplomatic missions of Uganda and Burundi in response to their continued support for the TFG.[9] Specific threats targeting the Ugandan and Burundian capital cities also featured in an al-Shabab statement dated October 22, 2009, in which senior al-Shabab commander Shaykh Ali Mohamed Hussein stressed: “We shall make their people cry. We will attack Bujumbura and Kampala…We will move our fighting to those two cities and we will destroy them.”[10]

Ugandan and Burundian troops have also come under sustained attack in al-Shabab-controlled areas of Mogadishu in IED attacks, raids, ambushes, targeted assassinations, and stand-off weapon operations. In one such exchange on June 3, 2010, mortar fire between al-Shabab militants and TFG troops (backed by AMISOM peacekeepers) in the Kaaraan, Yaqshid and Abdiazziz districts of the capital left 23 people dead and 66 others wounded; two of those killed were Ugandan troops.[11]

Al-Shabab’s operational capacity to project its campaign beyond Somalia’s borders ultimately relates to a range of shifts in the group’s internal dynamics during the past two years, culminating in the emergence of a highly centralized and radicalized organization that is far more capable of pursuing its extreme Islamist ideology.

Most notably, al-Shabab’s loose network structure has been supplanted by a more centralized organizational hierarchy coalesced around several key Somali extremists.[12] These include the group’s leader Ahmed Abdi Aw-Mahmoud (known as “Godane”), Ibrahim Haji Jama “al-Afghani,” and Shaykh Fuad Mohamed “Shongole.” These individuals are thought to be supported by several foreign al-Qa`ida operatives implicated in the 1998 U.S. Embassy bombings in Nairobi and Dar es Salaam, as well as the attacks on Israeli tourists in Mombasa in November 2002,[13] principal among them being Fazul Abdullah Muhammad (al-Qa`ida’s leading figure in Somalia).[14] Many of these foreign fighters have settled in al-Shabab camps in southern Somalia and are involved in training Somali militants.[15] Their primacy in the upper echelons of al-Shabab’s leadership hierarchy also facilitates and ensures the high degree of operational planning and preparedness required to successfully launch large-scale operations.

Al-Shabab has also crafted a vigorous communications strategy designed to promote and garner domestic and international support for its extreme ideology, as well as discourage further external meddling in Somalia. Al-Shabab’s media wing—the al-Kataib Foundation for Media Productions—frequently issues high quality video and audio statements containing threats of future attacks, or glorifying past operations (particularly martyrdom operations). A 10-minute video released by al-Shabab in early June 2010 titled “The African Crusaders” is one of the slickest productions to date, containing footage and images of heavy clashes with AMISOM troops in northern Mogadishu on May 27.[19] Speaking in English, the narrator questions the involvement of Ugandan and Burundian troops in Somalia, accusing them of “fighting America’s war in a foreign land.”[20]

Al-Shabab is also actively seeking material and physical support from Somali communities in Western Europe and the United States, further enhancing its international characteristics. For instance, in February 2008 three Somali immigrants were arrested in Sweden and three in Norway on suspicion of financing terrorism (five individuals were subsequently released without charge; one Norwegian national was charged in October 2009 with collecting money for Somali terrorist groups).[21]

Many of the individuals recruited into al-Shabab’s ranks or suspected of providing material support to the group are U.S. nationals, some of whom have become highly radicalized. On November 23, 2009, as part of an ongoing U.S. investigation into Somali Islamist insurgent support networks, 14 individuals were charged with recruiting and financing some 20 Somali men in the Minneapolis area of Minnesota, who subsequently traveled to Somalia and trained at al-Shabab camps.[22] According to official court documents, a Somali-American who traveled to Somalia, Shirwa Ahmed, was one of five suicide bombers involved in simultaneous suicide attacks in northern Somalia in October 2008.[23] The central concern among U.S. counterterrorism officials is that more members of the Somali-American diaspora might embrace terrorism, and that al-Qa`ida will continue to exploit and develop its base in southern Somalia from which to target U.S. and Western interests.[24]

Another U.S. national recruited to al-Shabab, Omar Hammami (also known as Abu Mansur al-Amriki), has emerged as a high-profile media representative, appearing in numerous al-Shabab propaganda videos and providing a foreign face to the group.[25]

Each of these attributes—an increasingly radical agenda, a centralized leadership structure, refined propaganda machinery, and a foreign support network—suggests that al-Shabab will continue to evolve into a greater regional threat. Indeed, on July 15, 2010, al-Shabab threatened further attacks against Uganda and Burundi in an audio statement aired on Mogadishu radio stations, in which al-Shabab insisted that “what has happened in Kampala was only the beginning. We will keep revenging what your soldiers remorselessly did to our people.”[26]

Concurrently, however, al-Shabab’s evolution into a more overtly internationalist organization has undercut some of its appeal and support base within Somalia.[27] Al-Shabab’s hard line interpretation of Islam (in which it is attempting to impose religious uniformity on Somali society at the expense of traditional clan structures and beliefs) has failed to resonate with many Somali citizens.[28] In addition, while al-Shabab’s increasingly brutal operational tactics—specifically suicide bombings targeting civilians—have enabled it to retain territory in central and southern Somalia, such tactics have also caused public outrage and alienated supporters, even in traditional al-Shabab strongholds.[29]

Al-Shabab is also coming under increasing pressure from other Somali factions, particularly Hisbul Islamiyya (another of Somalia’s Islamist organizations that emerged from the collapse of the ICU). Tensions between the two groups intensified in October 2009 when Hisbul Islamiyya and al-Shabab militants fought each other for control of the strategically important town of Kismayo.[30] Consequently, al-Shabab’s efforts are now largely focused on re-establishing its political and military credentials, and vying for influence alongside other factions in Somalia’s Islamist movement.

As such, while al-Shabab’s successful execution of sporadic, large-scale attacks abroad seems quite feasible in the future, a protracted foreign campaign—in which al-Shabab develops and retains external networks responsible for launching attacks against Ugandan and Burundian targets—appears beyond the group’s present capabilities.

Tim Pippard is Senior Consultant in the Security and Military Intelligence Practice of IHS Jane’s, and is currently Research Director of an IHS Jane’s study entitled “Relationships and Rivalries: Assessing Al-Qa’ida’s Affiliate Network.” He is Assistant Editor of Perspectives on Terrorism (the journal of the Terrorism Research Initiative), and former managing editor of Jane’s Terrorism and Insurgency Center (JTIC).

[8]  Although AMISOM’s force size has failed to reach its mandated 8,000, Uganda’s deployment of a fourth battalion in mid-March 2010 took the force size to 6,120 troops. Of this total, Ghana, Cameroon, Senegal and Zambia have contributed four military staff officers to AMISOM headquarters in Mogadishu. Nigeria, Sierra Leone and Zambia have also contributed to the 40-strong AMISOM civilian police deployment in Somalia. See “Report of the Secretary-General on Somalia,” United Nations Security Council, May 11, 2010.

[13]  Johnnie Carson, “Developing a Coordinated and Sustainable U.S. Strategy Toward Somalia,” testimony before the U.S. Senate Select Committee on Foreign Relations, May 20, 2009.

[16]  For instance, in Algeria the Salafist Group for Preaching and Combat’s (GSPC) alignment with al-Qa`ida in late 2006 led to a resurgence in violence characterized by large-scale suicide attacks in April, September and December 2007. See “JTIC Country Briefing – Algeria,” Jane’s Terrorism and Insurgency Centre, June 1, 2009.

[28]  The International Crisis Group (ICG) has documented numerous instances of public disaffection at al-Shabab’s attempts to impose its extreme vision of Islam on Somali society. ICG researchers also note that public disillusion with al-Shabab is being further fueled by its poor governance record in southern Somalia. See “Somalia’s Divided Islamists.”