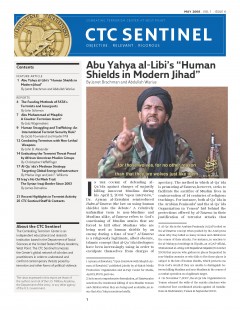 Al-Qa`ida’s leadership seeks historical and religious authenticity in their manner, clothing, speech and word choice, and even in the tactics they have embraced. Following the loss of their bases in Afghanistan in 2001, much of al-Qa`ida’s leadership retreated into the mountainous tribal regions along the Afghan-Pakistan border. Along with this physical migration—for them, reminiscent of the hijra (migration) of the Prophet Muhammad—al-Qa`ida’s leadership also migrated from a strategy of direct conflict, such as the attacks on the U.S. Embassies in Tanzania and Kenya in 1998 and New York and Washington in 2001, into a subtle but no less historically authentic campaign of long-term, low-intensity conflict against its enemies. One core characteristic of this strategy is al-Qa`ida’s efforts to target global energy infrastructure, especially in Saudi Arabia. An examination of the group’s official statements, strategy documents and other sponsored media suggests that al-Qa`ida will continue to sponsor attacks on key energy facilities in a concerted effort of inflicting significant damage to the world economy. In order to do so, al-Qa`ida may be employing tactics of low-intensity conflict inspired and guided by the example of the early Muslim community in Medina.

Al-Qa`ida’s interest in targeting global energy facilities represents a recent and dramatic change in strategy. In 1996, Usama bin Ladin acknowledged the strategic importance of the energy sector in his “Declaration of War Against the Americans Occupying the Land of the Two Holy Places.” He cautioned against such attacks, writing: “to protect this (oil) wealth and not to include it in the battle as it is a great Islamic wealth and a large economical power essential for the soon to be established Islamic state, by Allah’s Permission and Grace” [1]. By March 2003, in consultation with al-Qa`ida’s leadership, Bin Ladin was clearly rethinking this strategy of benign neglect. In his “Sermon on the Feast of Sacrifice,” he wrote that “America is a great power possessed of tremendous military might and a wide-ranging economy, but all this is built upon an unstable foundation which can be targeted, with special attention to its obvious weak spots [reliance on oil from the Middle East]” [2]. It was not until December 2004, however, that Bin Ladin declared a new strategy on behalf of al-Qa`ida: “There is now a rare and golden opportunity to make America bleed in Iraq, both economically and in terms of human losses and morale…Focus your operations on it [oil production], especially in Iraq and the Gulf area, since this [lack of oil] will cause them to die off [on their own]” [3].

Within the year, al-Qa`ida attempted its first—albeit unsuccessful—large-scale ground attack on a key energy facility in Dammam, Saudi Arabia. Undeterred, in February 2006 al-Qa`ida succeeded in breaching security at the Abqaiq processing facility in Saudi Arabia, but was unsuccessful at interrupting production. Every year since 2006, Saudi security forces have interrupted large-scale, near operational attacks targeting the same energy-related sites, including Ras Tanura. Moreover, in a statement posted on an Islamist website just a few hours after the Abqaiq attack, al-Qa`ida operatives publicly announced the issuance of a religious (legal) ruling, or fatwa, as part of the authority and justification for the attack. Entitled “The Laws of Targeting Petroleum-Related Interests and a Review of the Laws Pertaining to the Economic Jihad,” the carefully reasoned fatwa sought to justify the targeting of petroleum-related interests throughout the world. Though supposedly written in June 2004, the fatwa was not publicly available until a February 2006 announcement. It is occasionally shared among participants on jihadist forums. Two recent examples include in late July 2007 and again in March 2008. Although Bin Ladin’s December 2004 statement referenced above represented a dramatic tactical change for the group, the reasons for the tactical shift were unclear at the time. The release of the fatwa, however, provided analysts a partial explanation for the dramatic change in strategy.

Al-Qa`ida’s leadership relies on the religious guidance found in numerous fatawa. Three in particular, however, stand out in the history of the group because of their associations with key aspects of the group’s strategy. The first two of these fatawa covered the issues concerning the religious acceptability of specific jihadist tactics: 1. the intentional targeting of women and children [4]; and 2. the use of weapons of mass destruction [5]. The third fatwa, related to attacks on petroleum-related interests, was written by Abd al-Aziz bin Rashid al-Anzi, a Salafi-jihadi Saudi thinker, who is described as one of the “main ideologues” of al-Qa`ida’s affiliate in Saudi Arabia [6]. The fatwa justifies the use of jihadist tools to target energy infrastructure within the rubric of the jurisprudential concept of economic jihad [7]. The importance of the fatwa is explained in Bin Rashid’s description of the complex jurisreligious problem that such attacks pose:

Some jihadists believe that targeting such wealth is a necessity as oil has harmed Muslims more than it benefited them, whereas other people believe that oil is the nation’s fortune and the source of its economy and that it is not appropriate to waste it. Such opposing ideas require a jurisprudence research in order to provide a sound interpretation/reasoning of such [an] important matter [8].

Anticipating complaints of   “transgression” from mainstream Islamic scholars, the fatwa is al-Qa`ida’s preemptive justification for attacks on facilities that produce great wealth for the Arab-Muslim world. It is also written as a religious and legal guide for the group’s ground commanders who may find themselves in a position of leading an attack on energy facilities.

In the fatwa, Bin Rashid draws an analogy between the Prophet Muhammad’s “Medinan strategy” of targeting caravan routes as part of the justification for economic jihad against energy facilities. After years of persecution by the ruling (pagan) Qurayshi tribe in Mecca, Muhammad and his companions migrated and settled in Medina in 622 CE. This hijra from the persecution of Mecca to the open hospitality of Medina not only begins the Islamic calendar, but also  frames an important battle tactic—controlled retreat, retrenchment and low-intensity conflict. From Medina, Muhammad and his followers refined the combat strategy of attacking caravan routes leading out of the city through the use of highly mobile small bands of Muslims in order to secure booty and weaken Mecca. Muhammad recognized that the global trade routes to the Levant and other points west were the economic lifeblood of Mecca. Eight years of such attacks degraded Mecca’s wealth and the ruling Qurayshi’s authority, while at the same time hardened Muhammad’s warriors and swelled the ranks of his followers. When the campaign-hardened Muslims from Medina finally engaged the Meccans in a large-scale battle, the former were much better prepared and won decisively.

Drawing a connection between this “Medinan strategy” and contemporary low-intensity conflict, Pakistani general S.K. Malik, in his book Quranic Concept of War, identified the ultimate purpose of the Meccan campaign. “The strategy adopted against the Meccans,” he wrote, “was one of exhaustion through economic strangulation and psychological dislocation” [9]. Malik attempts to reconcile traditional Islamic military tactics found in the Qur’an, sura, and hadith with contemporary military studies [10]. In so doing, he provides Western analysts insight into a possible methodology on al-Qa`ida’s strategic thinking on the subject of low-intensity conflict. Malik, for example, points out that the “Medinan strategy” relied on two primary tactics: first, the location of the caravan route—in this case, heading northwest along the Red Sea toward Syria was of “easy striking distance” from their location in Medina; second, these Syrian-bound routes were of high strategic value to the enemy since “the economic life of the [Qurayshi] was almost entirely oriented to their trade with Syria” [11].

By drawing the analogy between the “Medinan strategy” and today’s economic jihad against energy facilities, Bin Rashid seeks to lay the theoretical groundwork for al-Qa`ida to practice contemporary economic jihad in a more righteous way, while simultaneously deflecting any criticism that such tactics are bid`a, or an innovation without support in the Islamic holy sources. Al-Qa`ida’s leaders may envision their own lives as paralleling the lives of members of the first Muslim community as it coalesced in Medina, and may have decided to return to a state of action more in line with Islamic history as understood by them. Their continued attempts at targeting energy facilities on the Arabian Peninsula could fulfill both tactics described above.

If this is the case, then al-Qa`ida’s own version of the “Medinan strategy” has already been a success. Since its “migration” into the mountain regions along the Afghan-Pakistan border, al-Qa`ida has made remarkable progress consolidating its influence over other militant Salafi-jihadi Islamist groups, at least ideologically. They have had many near-operational successes, such as their ambitious attempts at Gulf facilities, their attacks in London, and four ongoing low-intensity conflicts: Iraq, Afghanistan-Pakistan, Yemen and Algeria.

If al-Qa`ida sees its attempts at targeting key energy facilities as a righteous act, then they could be interpreting their strategic successes as “grace” from Allah. In the context of al-Qa`ida’s long-term strategy, energy infrastructure in the Persian Gulf has become the contemporary version of Mecca’s caravan routes. The attacks and target selection become historically authentic actions, aligning al-Qa`ida with a well-known tradition of the Prophet and his followers, elevating their relative stature throughout the Salafi-jihadi community. As long as they see some spiritual benefit from attempting such attacks, even if they are regularly tactically unsuccessful, al-Qa`ida will continue to wage contemporary “caravan attacks,” targeting international energy infrastructure.

Marisa Urgo, MSLS, was senior counter-terrorism and energy security analyst at the U.S. Department of Energy from 2003-2008. She has also held counter-terrorism and management positions at the FBI and Raytheon Company. Her areas of interest include the theological foundations of the Salafi-jihadi movement and its long-term implications for homeland security and foreign policy. Her work in open source intelligence (OSINT) is currently supporting the development of data-mining and analysis applications.  She and Jack Williams are co-authoring a book on open source research to be published in early 2009. Ms. Urgo has a blog at www.makingsenseofjihad.com.

Dr. Jack Williams is a Professor at Georgia State University in the College of Law and Middle East Institute in Atlanta, Georgia, where he teaches Islamic Law, Homeland Security and other related topics. Dr. Williams is also the Robert M. Zinman Scholar in Residence at the American Bankruptcy Institute in Alexandria, Virginia, where he is researching, among other topics, risk in the energy industry and the economic consequences of terrorism. He serves as a consultant to the federal government and the private sector on Salafi-jihadi theory and tactics, the role of culture in threat analysis and risk assessment, infrastructure protection, and counter-terrorism. He has testified before the House and Senate; has addressed the American Petroleum Institute, the National Petrochemical and Refiners Association, the American Chemistry Council, and American Society for Industrial Security; and has authored four books and more than 100 articles and papers.

[3] “Osama Bin Laden: ‘Today There is a Conflict between World Heresy Under the Leadership of America on the One Hand and the Islamic Nation with the Mujahideen in its Vanguard on the Other,’” Middle East Media Research Institute, Special Dispatch Series #838, December 30, 2004.

[4] “A Statement from Qaidat al-Jihad Regarding the Mandates of the Heroes and the Legality of the Operations in New York and Washington,” April 2002, available on various jihadist internet forums.

[5] “A Treatise on the Legal Status of Using Weapons of Mass Destruction Against Infidels,” May 2003, available on various jihadist internet forums.

[8] Translation by Mano Fooladi at the author’s request.