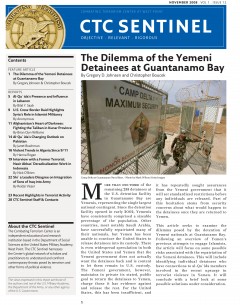 On the morning of November 19, 1995, a terrorist cell operating under the authority and financing of Dr. Ayman al-Zawahiri’s Egyptian Islamic Jihad (EIJ) organization unleashed two vehicle-based improvised explosive devices on the Egyptian Embassy in Islamabad. The attack leveled the embassy’s main wing, killing 17 and wounding another 60. While al-Zawahiri was clearly no fan of the Pakistani government during the mid-1990s, it would be a mistake to construe the incident as an attack against Pakistan. It is true that al-Zawahiri was perturbed with the joint Egyptian-Pakistani crackdown on the “Afghan Arabs,” but he was also a student of international politics. Al-Zawahiri believed that Pakistan’s ongoing cooperation with enemies such as Egypt and the United States was less the Pakistani government’s fault and more a structural outcome of the Zionist-Crusader “New World Order” that had been established.

Today, al-Qa`ida’s high command is likely holed up in the Afghan-Pakistan tribal territory, overstretched, embattled and perplexed, especially when it comes to their Pakistani policies. By spending the past eight years arguing that President Pervez Musharraf was the source from which all of Pakistan’s evils emanated, al-Qa`ida had failed to rhetorically prepare themselves or their audiences for a post-Musharraf Pakistan. Now, al-Qa`ida’s propagandists are scrambling to convince their constituencies that the new regime is no different than Musharraf’s. At the same time, al-Qa`ida continues to falter on fulfilling Khalid Shaykh Muhammad’s dream of integrating the domestic Pakistani jihadist movement with al-Qa`ida. A strong indicator about how poorly the integration is going is the extent to which senior al-Qa`ida leaders have been willing to pander to the Pakistani populace in their public statements during the past two years. Given the range of operational and strategic challenges they now face, there is growing reason to believe that al-Qa`ida’s high command is in dire need of a face-saving respite. The incoming U.S. administration will, therefore, need to think carefully and creatively about how to best capitalize on al-Qa`ida’s self-inflicted wounds.

In 1995, Dr. Ayman al-Zawahiri’s terrorist infrastructure inside Egypt had been decimated. More than 1,000 of his operatives were wrapped up by Egyptian security services, his mentor abandoned him and the EIJ’s incidental yet highly publicized killing of a schoolgirl soured much of the Egyptian population’s attitude toward his operations. The Egyptian security collaboration with Pakistan became particularly troubling for al-Zawahiri beginning in April 1993, when Egyptian President Hosni Mubarak passed Pakistani Prime Minister Nawaz Sharif the names of 1,500 Egyptians living in Pakistan, 600 of whom were deemed terrorists [1]. Pakistan’s new prime minister, Benazir Bhutto, followed suit by expelling a number of Egyptians who were working in Pakistan-based relief organizations [2]. The Egyptian-Pakistani security relationship came to a head for al-Zawahiri when the Pakistani justice minister visited Egypt to sign an extradition agreement between the two countries, ensuring that Egyptians apprehended in Pakistan could be more efficiently mainlined back to Cairo.

By 1995, Egyptian jihadists had declared an open war on Egypt around the world, including an assassination plot on President Mubarak during a trip to Ethiopia, a bombing of a Croatian police station in retaliation for the capture of a senior Egyptian jihadist spokesman, and the killing of an Egyptian trade attaché in Geneva for his suspected role in tracking down Egyptian jihadists in Europe. Al-Zawahiri’s decision to bomb the Egyptian Embassy in Islamabad fits squarely in line with these other attacks, which were fundamentally a reaction “to the Egyptian government’s expansion of its campaign against Egyptian fundamentalists outside the country” [3]. For al-Zawahiri, “the rubble of the embassy left a clear message to the Egyptian government,” not the Pakistani government or people [4].

Pakistan was not at the forefront of the jihadist leadership’s mind in the mid-1990s. In Usama bin Ladin’s well-known August 1996 and February 2008 fatawa, for example, the topic of Pakistan comes up just once in passing. In an undated interview with Daily Ausaf editor Hamid Mir, published on March 18, 1997, Bin Ladin briefly mentioned Pakistan’s decision to send Pakistani military forces into Somalia in support of U.S. and UN peacekeeping operations there. Given the fact that the United States was “run by the Jews,” Bin Ladin explained, any Pakistani cooperation with the United States, particularly in supporting military operations where Muslim soldiers could be killed, had to be rejected. Pakistan’s decision, however, was not a deal-breaker for Bin Ladin at the time [5]. To the contrary, in a May 1998 interview he suggested that a resurgence of Pakistani nationalism might help it achieve nuclear capabilities vis-à-vis India [6].

Even in the early months of Musharraf’s rule, jihadists were tolerably irritated with the Pakistani regime. In August 2000, for instance, Abu Mus`ab al-Suri, a trusted adviser to al-Zawahiri at the time, warned jihadists against committing terrorism in Pakistan because it had no critical Jewish and Christian targets [7]. Furthermore, its geopolitical importance, particularly its ready access to the Kashmiri front, made it better not to raise the Pakistani government’s ire. “We don’t burn the ground we pass through,” Suri counseled [8]. Before 9/11, Pakistan was simply not on the operational or ideological radar for al-Qa`ida.

Slipping into the Abyss

Bin Ladin had hoped that the 9/11 attacks would unite the Islamic world under the banner of al-Qa`ida as a way of dislodging the Zionist-Crusader “New World Order.” When the U.S.-led coalition began its retaliation in Afghanistan, however, he did not see the kind of overwhelming resistance movement for which he had hoped. On September 24, 2001, Bin Ladin appealed to the Pakistanis, “we incite our Muslim brothers in Pakistan to deter with all their capabilities the American crusaders from invading Pakistan and Afghanistan” [9]. Four days later he said, “Pakistan is a great hope for the Islamic brotherhood. Its people are awakened, organized, and rich in the spirit of faith. They backed Afghanistan in its war against the Soviet Union and extended every help to the mujahidin and the Afghan people” [10].

Bin Ladin finally realized that the Musharraf-led government would be unwilling to actively or indirectly support Bin Ladin’s call for mass mobilization against the Americans. By October 2001, Bin Ladin had enough. “Unfortunately,” he explained, “the position taken by the Pakistani Government has made it a pillar in this ominous alliance, this Crusader alliance…The brethren in Pakistan must take serious action” [11]. Bin Ladin’s call for unspecified “action” inside of Pakistan was a clear, final signal to Musharraf’s regime to back away from the United States or face all out war. When the prospect of a large-scale U.S.-led ground invasion into Iraq became real, al-Qa`ida concluded that the United States was finally initiating its push to divide and conquer the Middle East. Bold action had to be taken. In February 2003, Bin Ladin demanded that his followers overthrow the Pakistani government to save the nation from impending American domination [12]. In April 2003, Bin Ladin pushed harder, pleading for suicide operations against Musharraf’s regime [13].

During the next few years, al-Qa`ida codified its grievance list against Musharraf, charging him with blindly supporting the U.S. military agenda in Afghanistan at the expense of the lives of mujahidin, intentionally reducing hostilities with India—an unrepentant enemy of Islam—disarming Pakistan’s nuclear arsenal, recognizing the Jewish state of Israel, withdrawing its support for the legitimate jihadist resistance ongoing in Kashmir and sending the Pakistani military into the tribal areas to hunt down Taliban and al-Qa`ida forces.

Even though Musharraf is now out of power, the inertia of al-Qa`ida’s anti-Pakistan policy has made it difficult for them to back-peddle without admitting strategic weakness. In al-Qa`ida propagandist Adam Gadahn’s recent video dedicated to explaining al-Qa`ida’s post-Musharraf policy, he dismissed the Pakistani government’s public anger with recent U.S. raids into the tribal areas as nothing more than a “cynical public relations ploy,” similar to those used by Hamid Karzai in Afghanistan or by the Saudi regime [14]. Gadahn explained that he would be more apt to believe Pakistani rhetoric if “Pakistan had not continued to pledge its unwavering support” to U.S. military campaigns in Afghanistan, if the Pakistani Army was not “still engaged in a massive, bloody, and tyrannical anti-Islam campaign in Bajaur and Swat,” if Pakistan denied its territory and airspace to the U.S. military, or if the Pakistani government held Musharraf accountable for the crimes he committed against Islam during the past seven years [15].

Gadahn’s argument, likely developed in coordination with al-Zawahiri, can be viewed in two ways. First, it might be seen as an attempt to decouple their grievances with Musharraf to shore up the relevance of its anti-Pakistan argument with its jihadist constituency. This interpretation would be borne out by the incessant chatter of al-Qa`ida’s talking heads in recent months trying to reiterate al-Qa`ida’s old indictments against Pakistan in new, “Musharraf-less” language. The second more interesting interpretation is that al-Qa`ida is communicating with Pakistan and the United States about what kind of face-saving measures it needs to back off from its current anti-Pakistan trajectory. Gadahn’s list of grievances may actually be a diplomatic communiqué coded in screed. His low-level status in the organization fits well with general diplomatic protocols about where such talks are initiated. Al-Qa`ida may, in fact, be trying to negotiate their way out of the corner.

The fact is that al-Qa`ida finds itself in a variety of predicaments with regard to the Pakistani government, its army and its jihadist population. Al-Qa`ida’s headaches are U.S. opportunities. Nevertheless, a wounded animal can be extremely irrational, unpredictable and dangerous. It may be useful for the United States to find ways to decrease the domestic pressure on the ruling Pakistani regime while maintaining pressure on extremists. The less that Pakistan appears to be the handmaiden of the United States, the easier time it will have garnering the domestic support that it needs to effectively deal with its extremist problems itself.

Dr. Jarret Brachman is a specialist on al-Qa`ida strategy and ideology. He holds an appointment at North Dakota State University’s Upper Great Plains Transportation Institute. He also maintains a Research Fellow position with the Combating Terrorism Center at West Point. His new book, Global Jihadism: Theory and Practice, was published in September 2008 by Routledge Press.

[3] Ayman al-Zawahiri, “Knights Under the Banner of the Prophet Muhammad,” published in serialized format in al-Sharq al-Awsat, December 3, 2001.

[7] Abu Mus`ab al-Suri, The Brigades of the Global Islamic Resistance: The Call – The Way – The Method, recorded in August 2000.