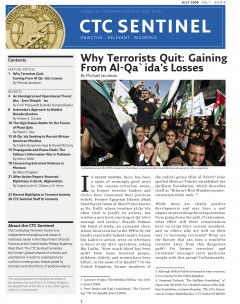 Does al-Qa`ida still operate primarily as a hierarchical organization, or is it fundamentally a worldwide brand-name for the global Salafi-jihadi movement? This question is the subject of an ongoing debate in terrorism studies. A specific subcomponent of this larger debate is the issue of organizational growth: is al-Qa`ida growing in the United States and elsewhere due to recruitment or to radicalization? Many argue that there are deliberate efforts by al-Qa`ida’s high command to recruit operatives among the U.S. population, while others claim that due to the decentralized nature of al-Qa`ida, expansion has its roots in homegrown sentiments and action. Analytical effort is better spent, however, at the nexus of these two static paradigms, as expansion is neither exclusively a top-down nor bottom-up process. One dynamic of al-Qai`da’s recruitment activities is the high command’s recognition of extant or potential radicalization patterns among social movements and its opportunistic capitalization on these observations. When al-Qa`ida recognizes the prospect of domestic radicalization in the United States, it amplifies that prospect from its media platform.

Al-Qa`ida second-in-command Ayman al-Zawahiri’s video release in May 2007 makes it clear that the al-Qa`ida leadership is targeting African-American Muslims as a potential source of membership, or at least as a fifth column in its operations against the United States. While this recruitment effort can be viewed as a top-down phenomenon, it is more accurately perceived as an attempt by al-Qa`ida to capitalize on domestic potentialities. This opportunistic methodology for expansion reinforces the idea that al-Qa`ida is pragmatic, adaptive, and less ideologically bound than some would be led to believe.

The transcript of the May 2007 interview of Ayman al-Zawahiri demonstrates al-Qa`ida’s perception of trends in the African-American Muslim community. During the interview, al-Zawahiri discusses, quotes and even displays video clips of Malcolm X. He reaches out to African-American Muslims in the United States, presumably because he interprets this community’s activist past as a potential avenue for future activism and radicalization. Al-Zawahiri praises Malcolm X and, at one point, specifically highlights his radical activism:

“Would that those who insist on peaceful resistance had heard what was said by the struggler and martyr (as we see him) al-Hajj Malik al-Shabaaz, or Malcolm X (may Allah have mercy on him): ‘Anytime you beg another man to set you free, you will never be free. Freedom is something you have to do for yourself…The price of freedom is death’” [1].

While Malcolm X and the Nation of Islam did not advocate violence as a means of achieving their goals, al-Zawahiri interprets their story as an example of radical activism into which he can tap.

Al-Zawahiri immediately follows this clip by arguing that the United States “will throw you into the street without mercy like an old shoe” [3]. He supports his point by citing the example of homeless, wounded veterans who are victims of the “capitalist Crusade.” By using such rhetoric, al-Zawahiri is trying to identify himself to the African-American community as a fellow victim and a potential leader of African-Americans, similar to Malcolm X.

Al-Zawahiri proceeds to introduce a variant of the Salafi-jihadi doctrine of takfir into the African-American discourse. By making reference to former Secretary of State Colin Powell and Secretary of State Condoleezza Rice as “house slaves” who help keep down “field slaves,” he is drawing a parallel to “apostate” Muslim leaders who keep down pious Muslims within their states. Ideally, al-Zawahiri would like to implant sentiments within the African-American community similar to those that are integral to al-Qa`ida’s fundamental ideology. He is cleverly interlacing the narrative of the global jihad with the domestic context of oppressed African-Americans in an attempt to conflate both ideologies. Al-Zawahiri is co-opting the persona of Malcolm X to identify himself and al-Qa`ida as proponents of African-American Muslims. He adopts the same tone as Malcolm X, identifying problems African-Americans have historically faced in the United States. While Malcolm X does not specifically offer a solution in the video, al-Zawahiri does. He tells African-American Muslims that with Allah’s help they can rise up to free themselves from the “most powerful tyrannical force in the history of mankind” [4]. While it is unclear whether he is seeking recruits for al-Qa’ida specifically, he is undoubtedly haranguing the domestic, African-American Muslim community to join in the fight against the West.

Although African-Americans have attracted the most focus from al-Zawahiri’s recruitment efforts, al-Qa`ida is attempting to reach out to multiple racial groups. In a post-May 5, 2007 web posting by Abu Dujana al-Khurasani, one of the elite writers for al-Qa`ida’s secure al-Hisba website, al-Khurasani courts not only African-Americans, but also Native Americans, Vietnamese, Aboriginals, Japanese, North Koreans, Venezuelans, Panamanians, Colombians, and poor immigrants to join in the fight against their “oppressor,” the United States. Al-Qa`ida is looking to all these groups of people, whom they consider to be disenfranchised by the United States, as potential followers of its cause. Having seen numerous examples of radicalization within the disenfranchised and poorly integrated Pakistani population in the United Kingdom, al-Qa`ida understands that it is a worthwhile strategy to target disenfranchised communities for recruitment with deliberate propaganda campaigns.

After the al-Zawahiri interview, a fairly sizeable amount of Malcolm X chatter surfaced in jihadist internet forums. For example, the story and image of Malcolm X has been invoked several times in the al-Ekhlaas forum. Many of the postings praise him as a martyr and offer biographical information. More importantly, one can find links to a fascinating video entitled “Malcolm X: Prince of Islam.” Preceding the biographical video on Malcolm X is a music video, “By Any Means Necessary,” by “Sheikh Terra,” who also produced “Dirty Kuffar” in 2004. The music video makes direct appeals to African-American sentiments by specifically presenting a rap song and showing images of Malcolm X, men clad in KKK robes and the lynchings of African-Americans. Calling the “Army of Allah” to “fight oppression,” the music video further promotes militant activity by displaying video clips of Improvised Explosive Device attacks on U.S. forces in Iraq and training exercises of what one would assume to be jihadist militants [5]. Again, Salafi-jihadis are attempting to interlace issues which matter to them with those that evoke emotions from African-Americans.

Furthermore, in January 2008 a jihadist in al-Hisba posted a diatribe that did not mention Malcolm X, but rather focused on racial tension in the context of the upcoming presidential election. He indicated that the Democratic contest between Senators Hillary Clinton and Barrack Obama has reinvigorated racial conflict in the United States and predicts that this tension will escalate into the ultimate “collapse” of the country [6].

Groups Possibly Receptive to the Message

While it may seem speculative to assert that al-Zawahiri has taken note of certain radicalized groups of African-American Muslims, it is safe conjecture that they have not gone unnoticed due to the publicity they have received. Domestic and largely homegrown radical Islamist groups within the United States, such as Jama`at al-Fuqara’ (JF), Jami`at al-Islam al-Sahih (JIS), and the radicalization efforts of Warith Deen Umar in the New York State prison system have attracted widespread media attention across the world. Accepting that al-Qa`ida is a “thinking” organization, members of the high command have likely noticed these radical cells and view them as a potential source for recruitment in the United States.

The four members of JIS who converted, radicalized and plotted attacks from within prison walls in Sacramento were arrested in 2005 for their “roles in a terrorist plot to attack U.S. military facilities, Israeli government facilities and Jewish synagogues in the Los Angeles area” [7]. Three out of the four members of this group, to include its leader and founder, Kevin James (Shaykh Shahab Murshid), are African-American Muslims. A militant strand of activism within the broader African-American Muslim community is further evidenced by JF. This group, allegedly founded by Shaykh Mubarak `Ali Gilani and “comprised mostly of African-American Muslim converts” [8], is credited with conducting “militant and criminal activities in the United States and abroad” [9]. In addition to these groups, radical trends within the African-American Muslim community are highlighted in a Pew Research Center study: only 36% of native-born African-American Muslims expressed a very unfavorable view of al-Qa`ida, while other native-born Muslims did so at a rate of 69% and foreign-born Muslims at a rate of 63% [10]. It is safe to assume that al-Zawahiri is aware of such activities and sentiments on American soil and considers them as factors when pondering how to augment al-Qa`ida’s global movement with American recruits and incite violence in the United States.

Despite the recent appearance of Malcolm X in al-Qa`ida media and racially charged chatter in jihadist web forums, there does not appear to be any noticeable grassroots movement from the African-American Muslim community. This lack of a grassroots response may signify that this particular propaganda tactic with this particular community is ineffective or based on miscalculation. While al-Qa`ida has been able to take advantage of grassroots sentiments among Muslims in the United Kingdom, it is entirely possible that African-American Muslims, and American Muslims in general, simply have no inclination toward Salafi-jihadi actions. Al-Qa`ida’s willingness to reach out to such communities within the United States with no strong history of Salafist-inspired activism indicates that al-Qa`ida’s strategy for expansion or incitement is based more so on pragmatism than ideological imperatives.

Al-Zawahiri’s May 2007 interview demonstrates that al-Qa`ida’s approach to expansion in the United States is one that seeks to take advantage of perceived bottom-up trends within the African-American Muslim community. In essence, al-Qa`ida high command is using an opportunistic strategy. At least in regard to recruitment within the United States, al-Qa`ida hopes to find success at the nexus of opportunity in which bottom-up radical sentiments will be receptive to its top-down efforts to appeal to possible recruits. This methodology, which focuses neither solely on hierarchical efforts from the top nor homegrown interest from the grassroots, reflects immensely on al-Qa`ida’s pragmatic and adaptive nature. Indeed, since al-Qa`ida cannot merely rely only on recruitment or radicalization independently, it is endeavoring to exploit the communities in which the two phenomena meet.

Benjamin Haas and Daniel McGrory are members of the classes of 2009 and 2010 at the United States Military Academy, respectively. CDT Haas is majoring in international relations and CDT McGrory is majoring in economics with a minor in terrorism studies. They recently interned with the Combating Terrorism Center supporting the Federal Bureau of Investigation.