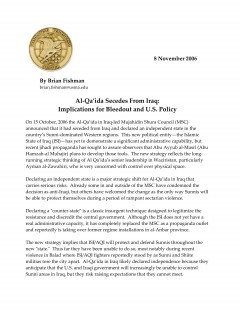 On October 15, 2006, the Al-Qa’ida in Iraq-led Mujahidin Shura Council (MSC) announced that it had seceded from Iraq and declared an independent state in the country’s Sunni-dominated Western regions. Declaring an independent state is a major strategic shift for Al-Qa’ida in Iraq that carries serious risks. Already some in and outside of the MSC have condemned the decision as anti-Iraqi.