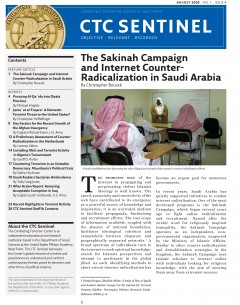 Most coalition force personnel are skeptical of the phrase “acceptable corruption.” In the early months as an advisor to the Iraqi Army in 2006-2007, I would not have been able to find two more incongruous terms. In Iraq, corruption is clearly one of the biggest obstructions holding back progress. There are countless reasons why Iraq is in a state of mass corruption, but the main reason is because there are a myriad of opportunities for corrupt activities and the act itself is met with little or no consequence. This article will discuss further some of the details of widespread Iraqi corruption, but more importantly it will argue that there is a sustainable level of corruption that coalition force personnel must recognize and understand. The sustainable level will vary by province, organization and position in an organization. Leaders and soldiers alike must be agile enough to first realize that corruption exists and will always exist to some degree, then adapt to determine where the nebulous line sits between sustainable and unsustainable corruption. This determination is vitally important in today’s fight as vast responsibility is decentralized to the soldier level.

Corruption today in Iraq occurs at an astonishing rate. Since late 2003, it has rapidly taken over the economy. Tiered contracting, bribery and theft are some of the most common types that occur in all areas, from the central and local government, to security forces, businesses and NGOs. Many factors contribute to corruption. Iraq’s dozens of newly-formed political parties are engaging in the public discourse for the first time without history or laws concerning what forms of influences are permissible. The recent history of Iraq and the incredible instability through which the Iraqi people have lived has cast them into a situation where they have learned to take what they can while they can before the situation becomes worse. For many, corruption is the lesser of two evils, and it becomes a necessity. There are obviously also those corrupt individuals in powerful positions who continue their actions simply to line their pockets. Chiefly, there are few repercussions for those who conduct corrupt activities. There is a legal system, and there are laws, but most of those caught bribe officials or simply acquire release due to the pettiness of their crime when compared to the bomb-maker or sniper sitting in the next holding cell.

In developing societies such as Iraq, it is impossible to move forward in the reconstruction process without some level of corruption. Recognition, public awareness and swift, firm action by the government from the start will dictate the long-term success of the corruptors.

The Role of Corruption in the Iraqi Insurgency

In Transparency International’s Corruption Perceptions Index, Iraq ranks two from the bottom at 178 [1]. There is no doubt that a portion of the corrupt activity in Iraq contributes either directly or indirectly to the insurgency.

One example of how corruption can impact the insurgency occurred in 2007. In northern Iraq, there is a constant battle between the Turkmen, Kurds and Arabs over real estate because they all want rights to the Kirkuk oil fields. Police stations throughout the region are “owned” somewhat strategically by the ethnic or religious powerhouse in that area. On July 7, 2007, a devastating Vehicle-Borne Improvised Explosive Device detonated in an area predominately occupied by Turkmen Shi`a. Following the attack, members of a Turkmen Shi`a police station located a short distance to the north pursued what they considered the obvious perpetrators: the Sunni Arabs. They set up illegal checkpoints, stealing from and killing passerby Sunni Arabs. The police station chief had the backing of an Iraqi police general in the nearby large city. The general in turn had the support of coalition forces.

As tension escalated one evening, a full-out battle developed between a Turkmen Shi`a village and a Sunni Arab village. As bullets flew, the police chief made a call to the general, who subsequently made a call to coalition forces. Within minutes, coalition force helicopters had a Sunni Arab neighborhood in their sights. The Arabs’ only aggressive actions were to defend themselves against Turkmen oppression. Fortunately, coalition forces did not observe hostile actions or threats from the Arabs and the helicopters were called off. Had they fired on the Arab village, however, the negative effects and subsequent further potential contributions to the insurgency would have been significant.

This one minor example illustrates how twisted corruption can be in the rebuilding process as positions of power are used for personal gain. There are hundreds of other examples with direct contributions to the insurgency, many of them in the realm of financing insurgent activity. The sale of black market fuel in Ninawa Province alone is believed to generate $1 million to the insurgency a month [2]. Undoubtedly, coalition force reconstruction dollars have made their way into the hands of insurgents as well.

Where to Draw the Line

Leaders must rely on the “human factor” to adapt and draw the line separating acceptable from unacceptable. Unacceptable corruption for the coalition military can broadly be stated as corruption that is directly or indirectly contributing to the failure of coalition force operations. Direct contributions should be dealt with much differently than indirect. An individual indirectly contributing to the insurgency may not even know he is doing so, thus methods of dealing with the perpetrator should be tailored to maximize positive effects, thereby benefiting the counter-insurgency rather than the opposite. Figure 1 (see PDF) attempts to depict the spectrum of corruption in Iraq.

One example demonstrating the difficulty in where to draw the line on corruption occurred in 2007, just before the significant publicity of the Concerned Local Citizens or Sons of Iraq. During that incident, the corruption of an undermanned Iraqi Army battalion commander was brought to my attention by one of the Iraqi officers I advised. There were rumors that several tribes in the southern part of the region had joined forces to stand up against insurgent activity in the area. Apparently, the Iraqi commander had been appointed to the position of executive officer of the tribal alliance. It quickly became apparent that the commander was in the position because he supported the alliance with military supplies. The tribal alliance was in possession of Iraqi Army AK-47s, large caliber machine guns and they drove Iraqi Army vehicles. During mission briefings, the commander would brief his soldiers, and then bring in leaders of the tribal alliance to explain the plan, as well as issue radios, ammunition and trucks. The Iraqi Army battalion and the tribal alliance were conducting simultaneous operations, and the battalion commander was not even in charge.

I was initially upset, mostly because the battalion commander was no longer in charge of his area of operations. I called the battalion commander on the phone and requested that he report to the brigade headquarters immediately following his operation. The following day, the Iraqi lieutenant-colonel reported with 18 detainees, many of whom were wanted by coalition forces, the rest directly connected to insurgent activities. My attitude quickly shifted, and I ended up giving the commander my compliments rather than condemnations [3].

This example illustrates the gray area that Iraqi advisors must adapt to understand. It is not all that dissimilar to the first anecdote mentioned. This battalion commander was severely undermanned, but consistently had a reputation of being one of the best. He used his power to provide security in his region. The battalion commander’s analysis of the situation and subsequent actions in aiding the formation and equipping of the tribal alliance was outside of my Western, institutionalized logic—even after living on an Iraqi base for 13 months. Our units later adapted and were able to work with this tribal alliance as a means to the same end. The resulting positive effects were astounding. The local citizens now play a direct role in maintaining their own security, in coordination with and under the control of local security forces.

Today, soldiers have to be prepared to be greeted with a “handshake or a hand grenade,” and as a result leaders must be particularly aware of the potential consequences of their soldiers’ actions or inactions [4]. The most important aspect that soldiers can take away from this is the knowledge that there are many forms of corruption and many factors and reasons why individuals may be corrupt. Zero tolerance of corruption is not realistic; the sooner soldiers understand this fact, the more successful maneuver units will be. Coalition forces cannot afford to prejudge unless they have firm evidence that the situation is contributing to the insurgency. The direct relationship between the counter-insurgency and the population makes this extremely important. With corruption trending upward, meddling unnecessarily easily affects the Iraqi people’s livelihood, which could in turn cause them to resent coalition forces even more.

The corruption and behavior of Iraqi security forces is a part of Iraqi public dissatisfaction. Broad abuse of power in the local area, mistreatment of subordinates and abuse of detainees are all examples of potential corruption that could contribute to the insurgency. Nevertheless, soldiers must be nimble enough to intelligently draw the line between acceptable and unacceptable.

Advisors to Iraqi security forces must realize that Iraqis often ensure security differently than coalition forces [5]. This realization is one of the biggest roadblocks that transition teams will face [6]. The coalition force methods are not always the best, and in some cases with host nation forces they can be some of the worst. Soldiers must be flexible, and leaders must be agile and intelligently adapt.

FM 3-24 states that “the decisive battle is for the people’s minds” [7]. Dealing with corruption at any level plays a large part. Meddle with an individual’s money and it will surely affect their way of thinking. In some cases it will be necessary; in many cases it will not. It is important not to lose focus of the end state. Acquisition and maintenance of popular support will ultimately determine the security situation and counter-insurgency operations in Iraq as a whole.

Captain Justin Gorkowski served as the Fires and Effects Officer for 2nd Brigade, 4th Iraqi Army from July 2006 to October 2007. He is currently attending the Naval Postgraduate School for a master’s degree in Joint Information Operations.

[3]  We did, however, talk about his responsibility in having overall control of his area of operations.