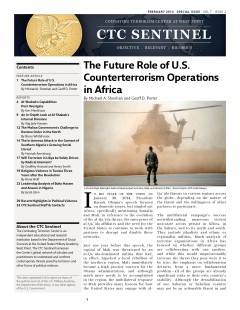 The Future Role of U.S. Counterterrorism Operations in Africa
By Michael A. Sheehan and Geoff D. Porter

In his State of the Union on January 28, 2014, President Barack Obama’s speech focused on domestic issues, but singled out Africa, specifically Somalia and Mali, in reference to the evolution of the al-Qa`ida threat, the emergence of al-Qa`ida affiliates and the need for the United States to continue to work with partners to disrupt and disable these networks. Numerous violent non-state actors persist in Africa, in the Sahara, and to its north and south. They include jihadists and ethnic or regionalist militias. Not only do these groups pose significant risks to their own country’s stability, but they also all have a cross-border component. The primary counterterrorism challenge in the region going forward is to ensure that these groups do not carry out future offensives like the one in Mali in 2012. When such offensives do occur, however, France’s Operation Serval in Mali may provide many lessons for how to contain the threat by using carefully coordinated coalition operations.

The Future Role of U.S. Counterterrorism Operations in Africa

The Malian Government’s Challenge to Restore Order in the North

Will Terrorism in Libya be Solely Driven by Radical Islamism?

Religious Violence in Tunisia Three Years after the Revolution

Leadership Analysis of Boko Haram and Ansaru in Nigeria