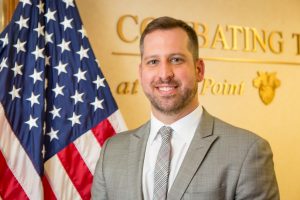 Dr. Jason Warner is an assistant professor in the Department of Social Sciences and an associate of the Combating Terrorism Center, where he directs the organization’s Africa research profile. He is a specialist in African international relations and foreign policy; African security and military affairs, especially African terrorism and suicide bombing; and African international organizations, particularly the African Union.

Dr. Warner is the co-editor with Timothy Shaw of the upcoming book African Foreign Policies in International Institutions (Palgrave-Macmillan, 2018) and has published in academic journals including Foreign Policy Analysis, African Security, Small Wars and Insurgencies, The Journal of Modern African Studies, The Journal of Human Security, and CTC Sentinel, among others. He is also the co-author of two CTC reports on the demographic and operational profiles of Boko Haram and al-Shabaab’s suicide bombers. His work has been cited in various international outlets, including the BBC, CNN, The Economist, The New York Times, Newsweek, and The Washington Post, among others.

Twenty Years After 9/11: The Threat in Africa—The New Epicenter of Global Jihadi Terror

A View from the CT Foxhole: Idriss Mounir Lallali, Deputy Director, African Centre for the Study and Research on Terrorism (ACSRT)

Outlasting the Caliphate: The Evolution of the Islamic State Threat in Africa

A View from the CT Foxhole: Donald Yamamoto, United States Ambassador to Somalia