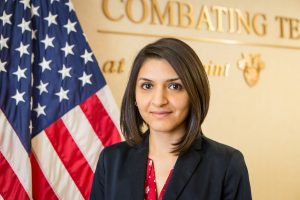 Dr. Amira Jadoon is an assistant professor at the Combating Terrorism Center and the Department of Social Sciences at the U.S. Military Academy at West Point as well as the CTC’s General John P. Abizaid Research Associate. She specializes in international security, economic statecraft, political violence, and terrorism. Her research employs both quantitative and qualitative methods to explore the implications of international policy tools, such as U.S. military aid and sanctions, on internal conflict dynamics. Her research also examines the behavior of non-state actors, especially in South Asia, and the types of environments that exacerbate terrorist activity.

Dr. Jadoon is fluent in Urdu, Hindko, and Punjabi and conducted field work in Pakistan for both her masters and doctoral research. She has presented her work at various conferences and published in International Interactions, Studies in Conflict and Terrorism, and European Political Science. Prior to beginning her doctoral program, Dr. Jadoon worked as a consultant for Deloitte London (U.K.) between 2006-2011.

Rising in the East: The Evolution of the Islamic State in the Philippines

Rising in the East: A Regional Overview of the Islamic State’s Operations in Southeast Asia

Broken, but Not Defeated: An Examination of State-led Operations against Islamic State Khorasan in Afghanistan and Pakistan (2015-2018)

Fixing the Cracks in the Pakistani Taliban’s Foundation: TTP’s Leadership Returns to the Mehsud Tribe