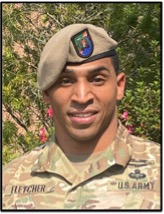 Captain George Fletcher graduated from the United States Military Academy and commissioned as an Infantry officer in 2012. In his first assignment at the 101st Airborne Division, he served as a Rifle Platoon Leader. George then served as a Platoon Leader, Executive Officer, and Assistant Operations Officer in the 3rd Ranger Battalion.